Nothing in Life is Permanent

I walked into the small meditation room not really knowing what to expect. Immediately I felt a presence of something huge and loving. It was thick and if it was a color it would be a golden fog. I sat down and started crying. Tears flowed out of my eyes in a manner that I had only experienced once before except this time the emotion behind it was not of sadness or despair. I was sobbing for no logical reason and there was an intense amount of love and bliss surrounding my body. There was something pure and limitless about it. In hindsight I realize that I had experienced this feeling a few times in church when I was a small girl and I had experienced it again in my adult life when visiting the Golden City in Southern India.

This room was special; I came here with a specific list of intentions. The feeling of floating and no mind was strong but I told myself I'd try to stay grounded and I’d remember my list no matter what, saying every item out loud. So I started talking, “My intention here is to heal any sadness and hurt I’ve caused to others or others have caused to me, to remove any blocks stopping me from increasing the financial abundance in my life, to liberate my ancestors to the highest light of heaven and to clear any negative karma I have acquired through all of my lifetimes (male and female) connecting all of these lessons into this body, now, so that I may be a pure vessel for the Divine to flow through and make use of.” Looking back it seems like quite an extensive and heavy list of requests, but at the time it was all that was there. It was all that I could focus on and it was flowing straight from my heart.

In the moment of saying my intentions out loud I felt like I had floated to a very special temple. This temple is a real life location in Southern India. The first time I visited this temple I was on a journey of self-discovery, it was my 1st time traveling outside of the United States by myself and of all places to test my travel skills, I picked an isolated place in the middle of nowhere in Southern India. It turns out there was no better place to find myself than in the middle of nowhere, completely lost.

During my 1st soIo trip abroad I had randomly met a group of amazing people from Norway and they became my travel companions. They happened to be traveling to the same temple as me (2 hour away from Chennai) and we decided to share a cab. After some horrible communication barriers and getting lost for an extra 3 hours I suddenly started laughing. The laughter was uncontrollable and there were tears running down my eyes, it felt like the top of my head had something pouring into it and my body felt light and full of energy. The laughter was pure bliss, and then Lise one of my new friends started laughing as well. We were looking at each other just laughing ourselves to pieces. Still riding in the cab I looked up and in the distance I could see the most majestic white temple I had ever laid my eyes on.  I instantly had an understanding that the energy field of the temple was having an effect on my kudalini (causing the bliss to run through my body). Little did I know that THIS was when my adventure and my life began.

Back in the little mediation room in Iowa, USA the tears, and the laughter and the bliss were rushing through my body. I had received a clear answer that, “YES, everything that you wish for you will receive.” I also saw a vision of a specific piece of sacred geometry. This vision was one of the designs on the top floor of that very special temple in Southern India. I saw it emerge from my back and lay directly on the opposite side of my heart chakra. It looked like a tattoo. It felt like it had been there before and it felt like it was ready to be there again.

Many more mystical things happened in that meditation room and perhaps I will post about that in the future. Regarding the vision I saw and felt on my back, after I had some time to integrate the energy more insights came to my awareness.
1. Nothing in life is permanent.
2. This isn’t your 1st time having this tattoo.
3. This symbol comes to you when you are on the path to your purpose (the reason I came to Earth).
4. You are always completely taken care of.

Three days after this experience I decided to get a better understanding of what this symbol meant. I knew nothing about it. This is what I found: It is called a Sri Yantra (Sri Chakra) and it is super awesome.

Sri yantra, also known as Sri Chakra, is called the King of all yantras because all other yantras derive from it. In its three dimensional forms Sri Yantra is said to represent Mount Meru, the cosmic mountain at the center of the universe.

The Sri Yantra is conceived as a place of spiritual pilgrimage. It is a representation of the cosmos at the macrocosmic level and of the human body at the microcosmic level (each of the circuits correspond to a chakra of the body).

Sri Yantra is first referred to in an Indonesian inscription dating to the seventh century C.E. It may have existed in India, its country of origin, long before the time of its introduction to Indonesia.

Man's spiritual journey from the stage of material existence to ultimate enlightenment is mapped on the Sri Yantra. The spiritual journey is taken as a pilgrimage in which every step is an ascent to the center, a movement beyond one's limited existence, and every level is nearer to the goal. Such a journey is mapped in stages, and each of these stages corresponds with one of the circuits of which the Sri Yantra is composed from the outer plane to the bindu in the center.

It was as simple as Googling "Sri Yantra Tattoo." There is actually a tattoo shop with that namesake. It is a place that focuses on Sacred Geometry and was clearly where I needed to go. I booked the appointment and both the flights and hotel. Six months later we were on our way to San Fransisco! 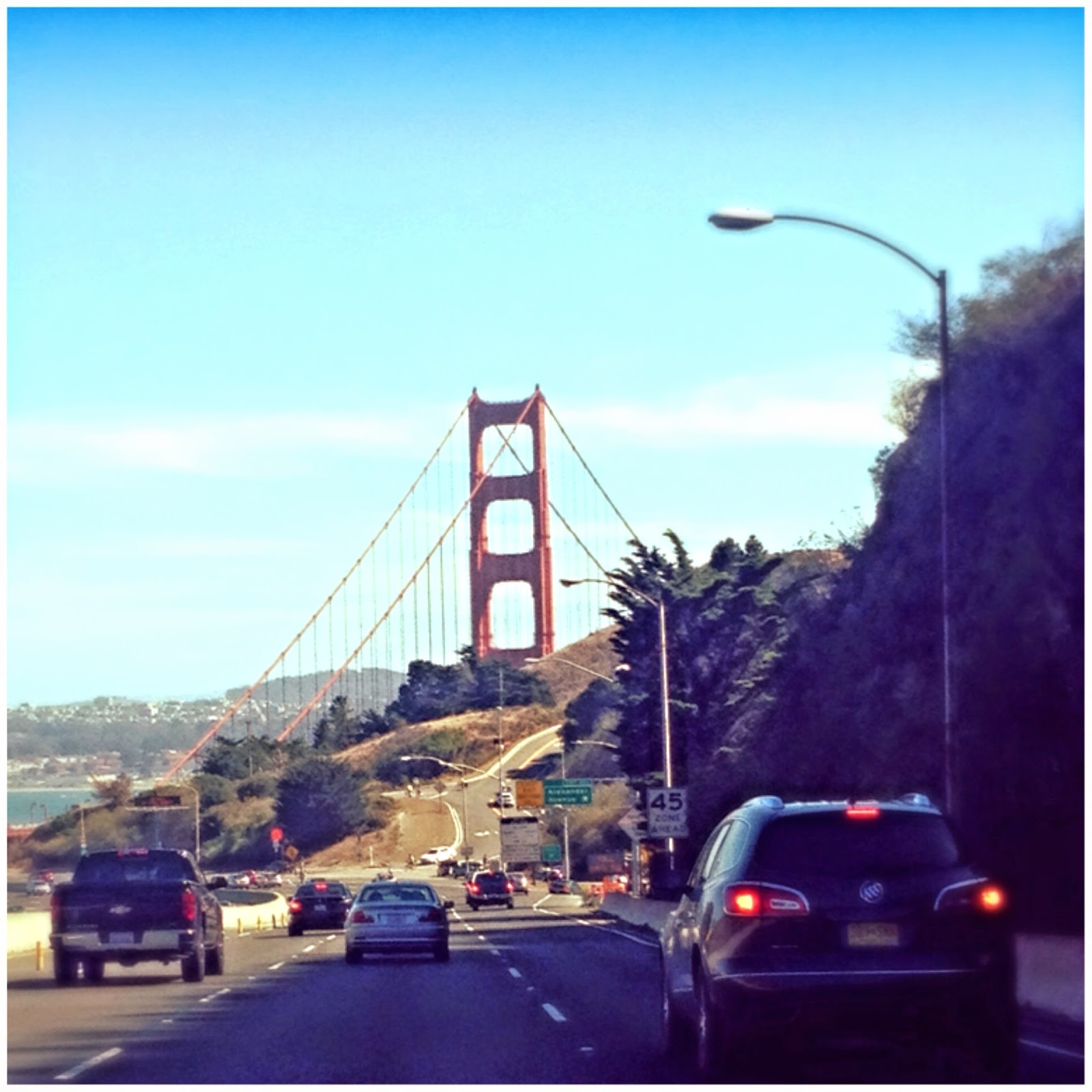 After a stop to pick up some healthy healing foods we were in Oakland meeting Dillon Forte of Sri Yantra Tattoo. In my opinion Dillon is someone who is blessed to have found his calling and I feel grateful to have found him.

And the process began.... 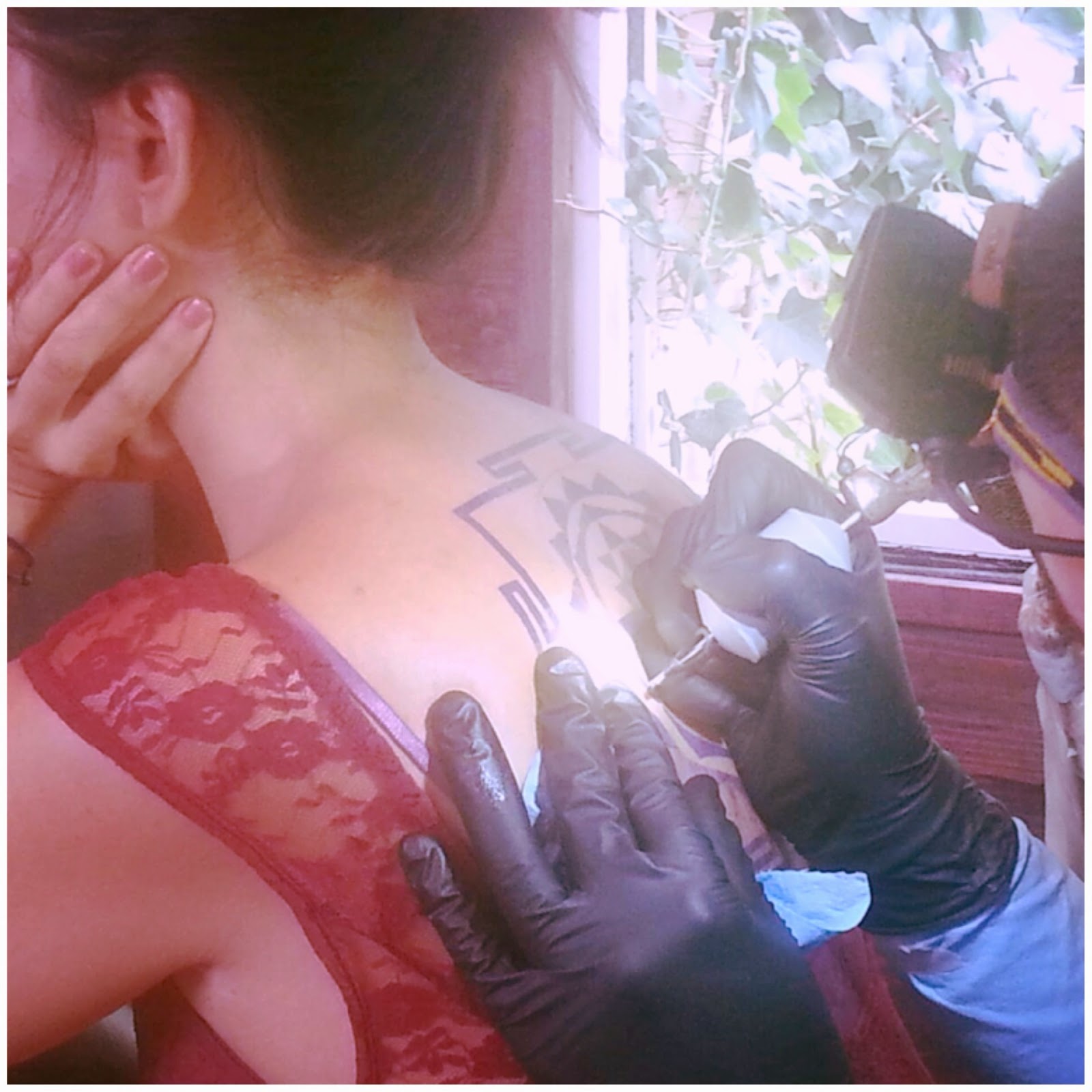 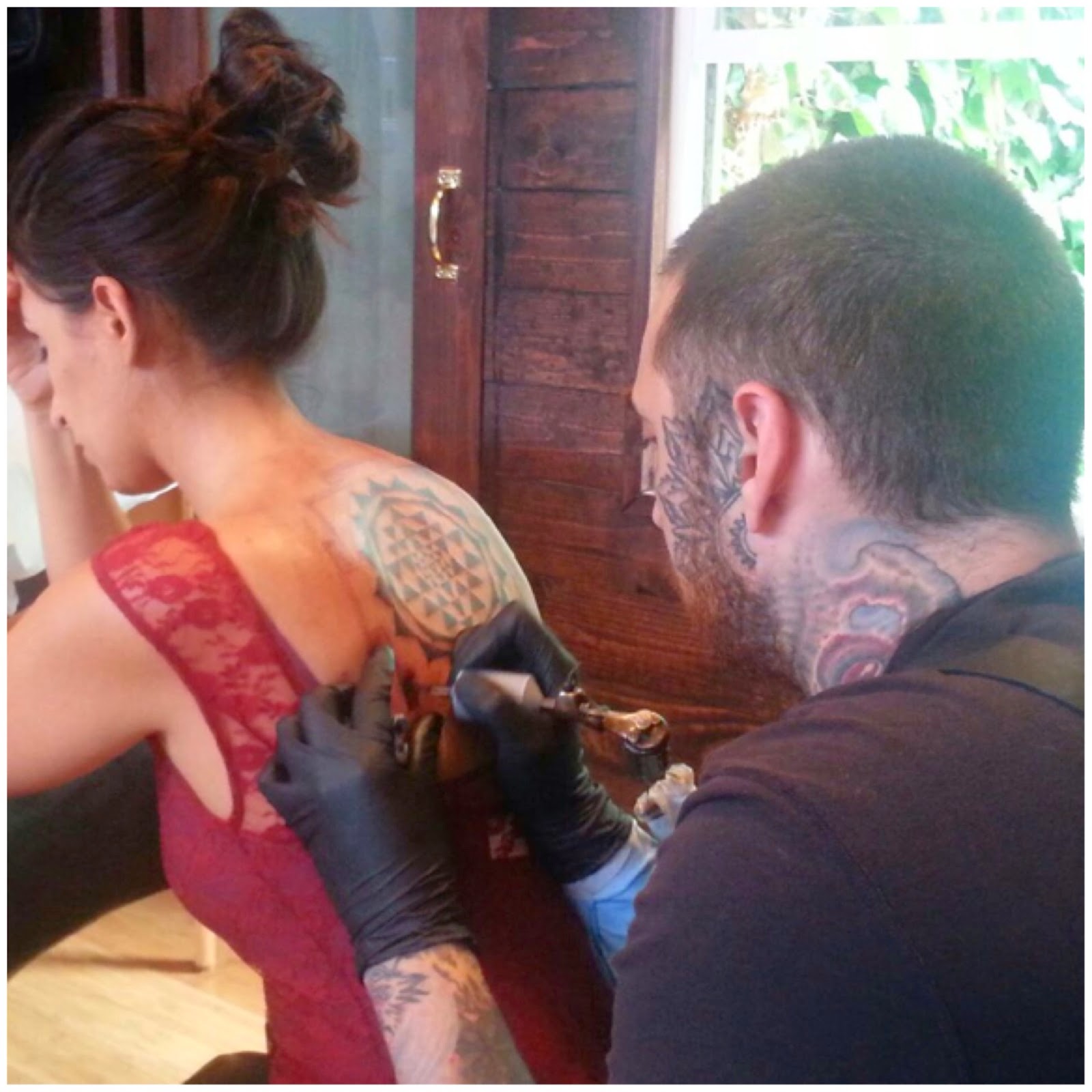 During the process I was in a very meditative state, chanting the Moola Mantra and visualizing the Sri Yantra located underneath the center spire of my special temple in India. I had some extra help by using hypnotherapy to help center and calm me. Of course being well hydrated and having light nutritious food circulating through the cells of my body helped the whole process go smoothly.
Everyone asks, "Did it hurt?" The truth is that I was calm and there was a sense of peace. There were moments that were intense but there was always a level of relaxation. Relaxing into the intensity was all I needed to do and before I knew it the moment had passed. I was not aware of how long the tattoo would take or where we were in the process, but during the last 10 shots of ink tears started running down my cheeks and there was a feeling of coming home. Then just as the tattoo had started, it was complete.

What is the end of this little tale? I don't feel there is one, this is a story of an amazing life that is just beginning...