For years the mind has told me that my riding a bus instead of driving the route I would have been taking the day the 35W Bridge fell was just a coincidence. “Nothing to talk about here, nothing to see, nothing to be grateful for.” - Whatever I do, “Don’t say it out loud, you’ll sound stupid.” Well here I am saying it out loud and the thought of any naysayers (people thinking this is stupid) brings up an uncomfortability, because up until now I was too conflicted to consider this as a Miracle. It's crazy how powerful & persuasive the mind can be. "Who am I to think that I'm special enough for God to take care of me in such an extravagant way?" says the mind. Well, here I go anyways...


On July 1st 2007 I moved to NE Minneapolis. The location was a quick on/off ramp away from my work. All I had to do was hop on to 35W and go south and bam, I was at work. (See map below)

It was an easy & simple drive to my job.  So why after this move to a new house was there an urge to suddenly learn how to ride a bus? Public transportation over the independence of my sweet car was not my style, but there was an urge to “RIDE THE BUS!” I thought, “Well I can read the paper and relax instead of having to sit through traffic – yeah, that would be nice.” But I still wasn’t convinced. There was NO reason for me to want to ride the bus. The bus schedule was confusing. It wasn’t a straight shot ride. I had to go through downtown and transfer to a different bus one or two times before making it south to Bloomington where I worked. It was actually quite a hassle, but for some reason I was determined to “conquer the bus system" and so, I started riding the bus. Annoying as it was, my body was automatically going through all the motions to learn the bus route, stand in the rain, sit in the uncomfortable seats and ultimately get to work. If I liked it or not I was a bus rider. 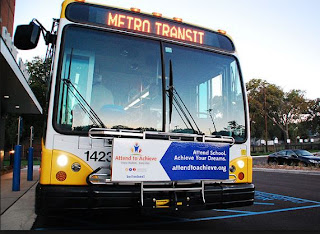 On August 1st 2007 at 6:05PM exactly one month after I started my “Bus Adventure” and within minutes/or seconds of when I would have been driving over the 35W Bridge in my car, the bridge collapsed.  I’m not being dramatic. It was the path I would have been on, and the time I was scheduled to be on the bridge (considering the day, the traffic and the time I left work).
See below: Instead of being on the path of the red box (the bridge that fell), I was on a bus safely going over a different bridge (circled in yellow) blissfully unaware of how the Divine rerouted my life one month earlier to keep me safe.

Photos of the bridge that the Divine did not want me on:


After the fall:
The day after the 35W Bridge collapsed, there was shock of what had happened, but internally there was peaceful feeling came through that said, “Okay, you can drive your car to work now.” And just like that, without a second thought I simply started driving my car to work. No more bus for me. It was as if the urge, determination, the NEED to “conquer the bus system, “ all of it, just left my body and I knew that it was okay for me to start driving myself to work again.
The Contemplation:
Since that day in 2007 the Mind has been telling me that riding the bus during the bridge collapse was not a Miracle. Today I can see that in my Heart I've always felt I was taken care of that day, but as that peaceful feeling would start to set in, the Mind would start rationalizing why I wasn't worthy enough to be taken care of in this orchestrated kind of way...and how my story sounded stupid. This back and forth between the feeling and the thought was the conflict around this experience.
My beautiful husband told me, "There are no feeling in your head and there are no thoughts in your heart. - Which place would you rather be?" All of a sudden it clicked. It's impossible to be in both the head and heart at one time. Being drawn to my heart but pulled away to the thoughts was the suffering & confusion.
The Confirmation:
I was taken care of that day the bridge fell. It was Divine intervention that rerouted my path to work, and for this I am Grateful.
There are two Miracles here:
1) My safety on a day that had the potential to be filled with hard lessons.
2) The Gift of seeing the Mind and living through my Heart.

Posted by MsBlissMpls at 9:09 AM